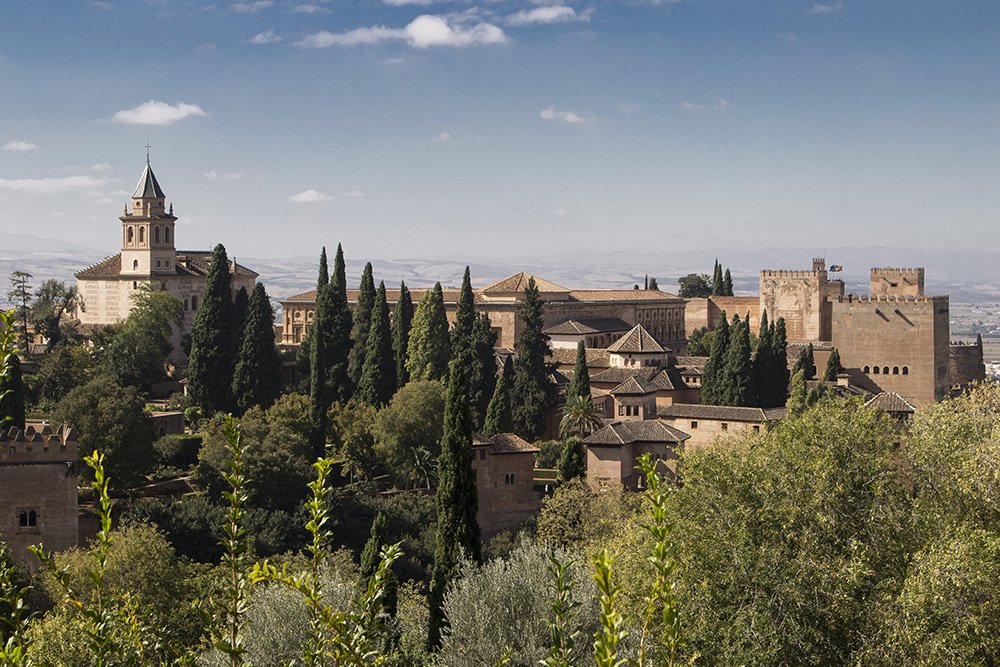 The famous Alhambra with its reddish walls definitely dominates the landscape of Granada. Actually, it is the reason I went to Granada in the first place. I have always been interested and fascinated by history, so I could not miss this opportunity. Well, the main problem I encountered planning my visit to the palace complex was the tickets, so here is everything I know about how and where to buy tickets for the Alhambra, Granada.

History of the Alhambra

The Alhambra was erected in the mid-13th century by the Nasrid rulers of the Emirate of Granada on the remains on a Roman fortification. The name Alhambra means the red, and the palace complex served as a residence for the Muslim rulers of Granada for about two centuries, and many of them extended it by adding new palaces. After the Reconquista, the Alhambra became the court of the Catholic monarchs. Of courses, the palaces were modified, so now visitors can only guess how it looked in all its splendor.

In general, the Alhambra is split into three parts:

– the Alcazaba: this is a proper fortress with towers overlooking Granada, and it means that this is the place to get amazing views of the city.

– the Nasrid Palaces: this is the residential area consisting of several palaces built by different rulers of Granada. I guess the most famous one is the Palace of Lions that was featured in the Assassin’s Creed: here the ruler of Granada handed over the Apple of Eden to the Spanish Inquisition to save his son. Anyway, the palaces are empty, and visitors can see only the richly decorated walls and fountains.

– the Generalife: this is a summer palace surrounded by magnificent gardens. It is quite far from the Alcazaba and the Nasrid Palaces, but all these three structures are connected with each other.

The fourth part, and the most beautiful one in my opinion, is the gardens. And these gardens are magnificent! They are full of roses and other flowers I do not know the names of, orange trees, palm trees, myrtles: it is definitely the best part of the Alhambra.

How to get the best views of the Alhambra, Granada

I get it, seeing the Alhambra from inside only is not enough. When I was in Granada, I kept looking for panoramic decks from where I could get another view of the fortress. While one can get pretty nice views of the Alhambra just by walking along the Carrera del Darro and specifically from the Paseo de los Tristes, there are other places.

Let’s start with those closer to the Alhambra. There is a panoramic deck in the gardens of the main Mosque of Granada and, really not far from it, the Mirador of San Nicolas. Both of them can get pretty crowded, and it is better to come there in the afternoon, as in the morning hours the sun is behind the Alhambra.

Some other places to get a glance of the Alhambra are the upper floors of the Palace of the Forgotten and the Palace Dar-al-Horra. The Sacromonte Abbey is a place for the panoramic views of Granada, and the Alhambra can be seen as well.

But my absolutely favorite panoramic deck is the little church of San Miguel Alto on a hill in Albaicin. Getting there takes some time and effort, but the views are totally worth it! In addition, as it is hard to climb up, there aren’t many people there. There are two ways to get up the hill:

• the first one is by taking Carril de San Miguel: this one is easier, it is just a road up
• the second one is a staircase starting at the Calle Cruz de la Rauda: there are dozens of steps, not that easy to go up, but I prefer this one.

Ticketed areas of the Alhambra, Granada

There are 3 ticketed areas in the Alhambra: the Alcazaba, the Nasrid Palaces and the Generalife. What I mean is that there are controllers at the entrance to each one of these places.

A visit to the Charles V Palace is free, and you can visit for free the area between the Alcazaba and the Nasrid Palaces, but this area is very small. Unfortunately, I cannot say anything about the main gardens between the Nasrid Palaces and the Generalife, as I had a ticket. Still, I did not find any info saying that the entrance to the gardens is free: if you have any info on this, I would really appreciate it in a comment!

Where is the entrance to the Alhambra, Granada

If you want to visit the Generalife first, head to the Restaurant La Mimbre: the entrance is next to it. I do not know the procedure there, because the Generalife itself is quite far from this entrance, but I know for sure that there are ticket controllers directly at the palace.


Where to buy tickets for the Alhambra, Granada

That is the most important question! I still remember how much time I spent looking for an answer. Whenever I looked, it was advised to buy the Alhambra tickets at the Ticketmaster website. And this is what I tried to do, but I failed. Their system did not want to accept my cards: I tried a couple of them, but I was still getting the same error. The support team was not of much help, so I had to look for other ways. In addition, now I can’t even access the Ticketmaster page for the Alhambra tickets: I guess it does not exist anymore.

As I could not find any ways to buy tickets online, and the time of my trip was approaching, I had to do something, so I had to buy Granada card, which was quite a good investment. Actually, this option is very convenient, as in addition to the entrance tickets I got 5 bus tickets, which came to be very handy. But don’t hurry to buy the card: just make your calculations and decide if it is a relevant investment, especially if you can get free entrance to some of the religious sites like the Cathedral of Granada, the Sacromonte Abbey (check my post on places to see in Granada).

I have recently come across another website which did not sell tickets before, but they do it now: the official website of the Alhambra. So, you are much luckier than I was 🙂 In case you decide against the Granada Card, this is the place to go. The process is easy: you select the ticket you need, choose the number of visitors, check if you are entitled for discounts, choose the date and time slot for the Nasrid Palace, put down your info and pay.

What tickets to buy for the Alhambra, Granada

If you want to visit the whole complex of the Alhambra, that’s the gardens, Alcazaba, Nasrid Palaces and Generalife, then you have to buy the Alhambra General ticket. The price is 14 EUR per person, but the system charges 0,85 EUR for the booking.

If you are short of money, there are tickets for the specific areas of the Alhambra, for example a visit to the gardens, Alcazaba and Generalife costs 7 EUR.

Children under 12 go in for free, and there are discounts for children between 12-15, EU citizens over 65, and people with disability.

Things to know about tickets to the Alhambra, Granada

Everybody must have a ticket! Even if you are with a little kid entitled to free entrance, you must get a ticket for him/her, when you buy yours. You will have to add the kid when you do the booking: this field is clearly marked, just don’t think it is not important!

Another thing to note: the number of visitors to the Nasrid Palaces is limited, so when you buy a ticket, you will be asked to choose a time slot, and you will have to be at the entrance to the palace before that time. When I was there, I saw the guards letting in those who came late, but I am not sure if it is a common practice.

The Alhambra is the most important and visited tourist attraction of Granada, so I strongly advise you to buy tickets as early as possible, like a couple of months in advance. In this case you will for sure get a ticket, and there will be more time slots for the Nasrid Palaces to choose from.

Just like I said, Granada is just one of the cities I visited in Spain, so if you are curious, I have a detailed, day by day itinerary for those 3 weeks I spent in Spain.

I guess it is safe to say you are interested in Spain. Why not to have a look at:

How to spend 3 days solo in Granada

A very long list of places to see in Granada

How to spend 3 days solo in Cordoba

A very long list of places to see in Cordoba

How to spend 2 days solo in Malaga

A DIY tour of Andalusia by bus

A long list of places to see in Salamanca

Places to see in Barcelona for first timers

Things to know before travelling to Barcelona

2 thoughts on “How and where to buy tickets for the Alhambra, Granada, Spain”

Don’t miss any posts, subscribe to the bimonthly newsletter!