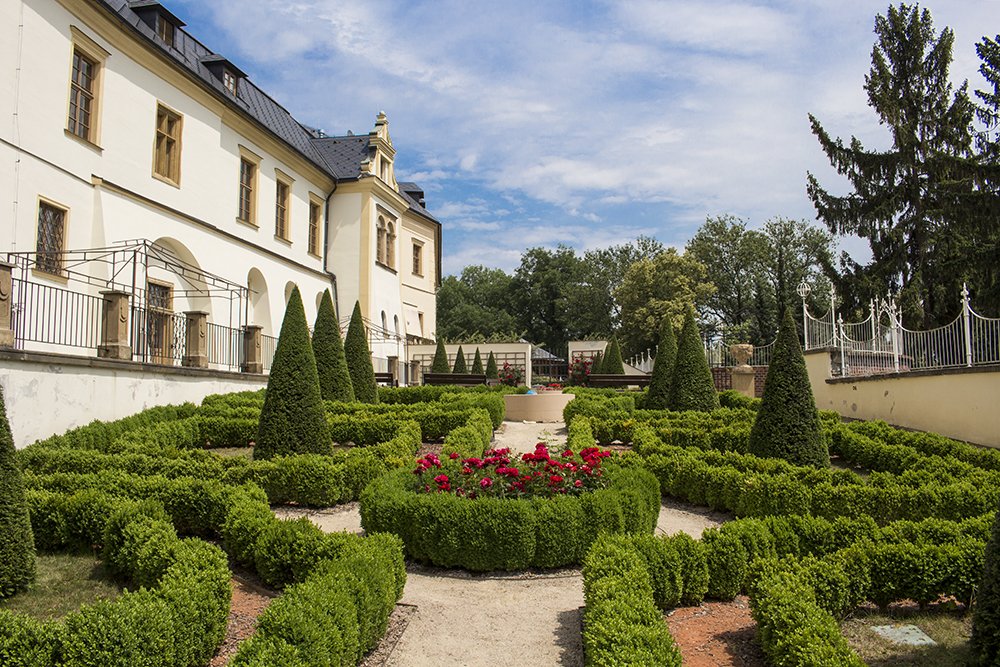 Olomouc is a magnificent city in the east of Czech Republic, in Moravia province. It is little known and there aren’t many tourists there. Personally, I have not heard much about it before I started googling for things to do in Olomouc.

I still remember how much I regretted that I did not have more time to spend there: this gem certainly deserved it. My bus from Brno arrived at Olomouc at about 10:30 AM and I had to catch a train to Prague at 3:30 PM. Basically, I had only half a day to spend in the city, so here are the things to do in Olomouc if you are short of time just like I was.

– it is not proved, but it is believed that Olomouc stands on a Roman fort and its name Iuliomontium (Mount Julius) was transformed into Olomouc.
– the Old Town of Olomouc is a UNESCO World Heritage Site.

How to get from Brno to Olomouc

It takes one hour by bus to get from Brno to Olomouc. Just like I mentioned in my previous post, I bought all my tickets from Regiojet, a local company by Student Agency. It cost me 3,60 EUR. I have written quite a lot about this company, but I will say it again: it is highly reliable, they have never been late. The service is impeccable, there are attendants in the buses, they meet passengers at the doors and serve free tea and coffee during the ride.

Booking tickets is easy, their website has an English version. And, what I liked very much, is that they have maps of the stations of arrival and departure! I am a control freak, so I bought my tickets in advance. I had them printed, but that was not necessary, as it was enough to show the booking number on the phone.

They operate some train routes as well. For example, I took a train from Olomouc to Prague, and it was a Regiojet train. Same impeccable service 😊

Things to do in Olomouc

The center of Olomouc is not far from the bus stop, so I went there on foot. I had put only the most important things to do – well, in my opinion 😊 – to my itinerary, so I had a clear idea of where I should go. The first stop was Saint Wenceslas Cathedral.

The cathedral is an imposing and tall building and I could see its towers from afar. I could fit it into my camera’s frame only when I was standing far from it 😊 It should not come as a surprise as the height of one of the towers is 100 meters.

This Gothic cathedral was built in the beginning of the 12th century, and there are mighty columns inside with colorful patterns. I liked the cathedral, despite being a bit dark inside, it seemed lighter due to gilded decorations and bright colours.

The Archdiocesan Museum is next to the cathedral, but I did not go in: I asked at the ticket office and was told that it exhibits religious paintings, sculptures and other objects, so I said ‘no’ to it.

Yes, the Archbishop’s Palace is the reason why I decided to stop at Olomouc for at least a couple of hours. And I wasn’t disappointed! Don’t miss this place, it is absolutely fantastic!

What I want to mention first is the service. The tours are guided, so I had to wait for my tour to start. There is a waiting room at the palace, and they provide you with water! For free 😊 I saw there a coffee machine and a price list next to it, but people who drank coffee did not pay anything, so I am not sure about this one 😊

The palace itself is magnificent! Exquisite furniture and paintings, great halls with rich decorations… I am afraid I do not have enough words to describe it, so just take a look at the pictures.

Some things that make it so important:

– The Russian Tsar Alexander I and Emperor Francis of Austria met here before the battle of Austerlitz.
– Franz Joseph I of Austria got to the throne here after Emperor Ferdinand abdicated.

Now, some practical things. As the tours are guided, I had to wait for the tour in English, but there was not one, so I went in with three people from Germany. Well, I do not speak German, so I was given an audio guide in English, and it went very well. Frankly, I am surprised that there were so few foreigners there, the place is stunning! Pictures are allowed against a price, you have to buy a ticket for this at the ticket office.

Inspired after visiting the palace, I went to another place that promised to be very beautiful. I like green areas, so I could not miss the rosarium. I went there through a passage at a university building, crossed the river and marched to 17. Listopadu street as the entrance is there.

Again, I was not disappointed! There were hundreds of fragrant roses of different colours there, and only one visitor – me 😊 I could take any picture I wanted, there was no one getting on my way 😊

When you get to the other side of the rosarium don’t go back but take the stairs and go to the proper botanical garden. Here you will see trees mainly (perfect for some shade 😊 ), flowers, ponds and fancy wooden statues.

Practical info: I did not pay anything to get in. The next thing I must mention as I was confused by it. When I crossed the river to get to the rosarium, there was a turnstile on the right. I headed there as it was really a shorter way to the gardens, but it was only for exit, so I had to go to the main entrance anyway 😊

After getting out of the botanical garden I had a short stroll along the river in the adjacent Bezrucovy Gardens. It is a park with rows of trees and the most notable part is the Mausoleum of Yugoslav Soldiers. Bezrucovy Gardens is a nice place to hide when it is hot outside.

After the gardens I went to the main squares. The gardens are on a much lower level than the city center, so I had to climb some steps in a weird passage. By the time I got there, the sun disappeared and it became dark and cloudy.

There are two main squares in Olomouc: the smaller Lower Square (Dolní Square) and the bigger Upper Square (Horní Square). Both are surrounded by restaurants and shops.

There are many fountains on both squares dedicated to Neptune, Jupiter, Hercules and Caesar. Personally, I found Arion fountain with turtles to be the most interesting one 😊

Anyway, the most famous structure of the Upper Square is the Holy Trinity Column. It was erected to glorify the faith and show the gratitude for the end of the plague.

Because of the maintenance in Prague I did not get to see its famous Astronomical Clock, but I had this pleasure in Olomouc 😊

The clock is on the wall of the town hall. Initially it included religious elements, but during the Communist era proletarian figures of farmers and labourers were added. There is a sundial, a dial with the signs of Zodiac and other dials. I still have no idea how it works but it definitely is an impressive structure.

Where to eat in Olomouc

Frankly, I took a very leisurely walk around the city and did not have time for lunch, but here are a couple of restaurants to consider: I selected them basing on their reviews.

Restaurant U Mořice: the restaurant is very close to the main square and serves meat, fish, soups, pasta, etc.
Moravská restaurace is right on the square. They serve many traditional dishes, but the prices are higher.
Michalský výpad is close to the square as well, prices are lower than in the above one.
Svatováclavský pivovar is a restaurant and brewery not far from Archbishop’s Palace. People seem to like their beer 😊
Tvarůžková cukrárna on Denisova Street is famous for its cheese pastries.

Things to do in Olomouc I did not have time for

Climbing the clock tower and St. Moritz church. I regret so much that I did not have time for this!

Olomouc Museum of Art: seems that it houses collections of modern art. Entrance fee is 100 CZK.

Church of Our Lady of the Snows, Červený kostel, St. Gorazd and St. Moritz Churches: I liked the pictures and decided I have to see them 😊 I just did not have time to do it.

Parks Smetanovy sady and Čechovy sady: I try to go to as many parks as I can when I travel. I love the serenity and greenery in these places.

Zoo: the zoo in Olomouc seems to be a very popular place. It is really far from the city center, but if you have more than a day, you can try visiting it. The entrance fee depends on season and age.

Other useful things to know about Olomouc

Tourist information point is in the town hall. Here you can find all the information about the city, buy tickets, order tours, etc. And there is public internet.

Lockers. I knew that I would spend 5 hours in the city and I certainly did not want to carry my bag with me, so I left it in the lockers at the train station nearby. They are not far from the entrance, you will see the signs. The machine takes only coins of 10 and 20 CZK and does not give any change, so I had to ask the lady at the shop nearby for coins. I paid 80 CZK as I had a big backpack. For smaller bags the cost is 60 CZK.

Toilet. I know for sure that there is a WC at the train station, the cost is 10 CZK.

Cheese in Olomouc. Olomouc is famous for its cheese, but in reality it is not produced in the city, but in Lostice, a small town about 30 km away. Still, it is quite a thing in Olomouc, and tourists gladly try it here. The most popular place is Tvarůžková cukrárna I mentioned above.

Day trips. I did not have much time in Olomouc, but if you are not in a hurry, then take some day trips. Go to Lostice and visit the famous Cheese Museum of Olomouc and, of course, buy cheese there 😊 The 14th century Bouzov Castle is not far from Lostice.

I guess it is safe to say you are interested in Czech Republic. Have a look at other cities:

How to spend a day in Karlovy Vary

How to spend a day in Cesky Krumlov

How to spend a day in Kutna Hora

How to visit Karlstejn Castle