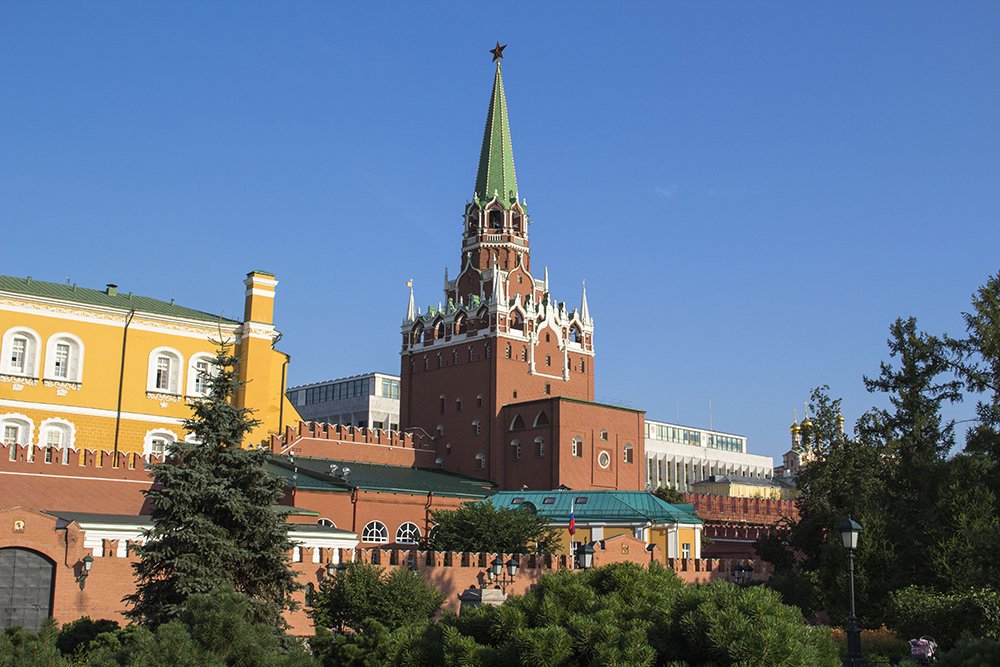 I have just come back from Moscow, and I have a very important announcement to make: Moscow is incredible and is packed with things to do and see! Seriously, if you don’t like Moscow, that’s because you don’t know it. I have been there many times, but my recent trip is the first time when I actually saw the city. So, here is my list of top 10 places to see in Moscow. Just for you to know, I had really hard time choosing these 10 🙂 I am going to Moscow again in August 2018, so I will have another guide on what to do in Moscow.

Need help with planning a trip to Moscow? I am here to help!

The Kremlin, of course, had to make its way to the top 10 places to see in Moscow. It is so much more than red castellated walls. Personally, my favorite is the Cathedral Square with its ensemble of old churches. You should definitely go inside: the interior is truly amazing with painted icons and graves of famous Russian rulers (in the Archangel Cathedral) – as Ivan the Terrible, for example. No photos are allowed inside. You can climb the Ivan the Great Bell Tower to see the square from above. And don’t forget about the Armoury Chamber with its huge collection of royal regalia and gifts and everyday objects. And then there is the Diamond fund!

By the way, did you know that the Kremlin was initially of white color? I bet it looked impressive! The Kremlin was painted red long before the October Revolution, so, contrary to a widely held belief, the Communists have nothing to do with it. Well, this is the place where all tourists start their acquaintance with Moscow. One can see the walls of the Kremlin, the mausoleum, St Basil’s cathedral, the famous GUM, the State Historical Museum. I guess this is the most instagrammable place in Moscow.

This church with colorful intricate onion-like domes is known to everyone as St Basil’s Cathedral, while its official name is the Cathedral of the Intercession of the Most Holy Theotokos on the Moat or Pokrovsky Cathedral. I like it for the colors, they are so vivid and cheerful, and the church itself looks like ‘terem’, a house from Russian folk tales.

No one leaves the Red Square without taking a picture in front of the cathedral. According to the legend, Ivan the Terrible ordered to blind the builders so that they could not create anything as beautiful. Well, the thing is that it is not known who actually built it. There is a name, but this architect definitely wasn’t blinded, because he later took part in the construction of another building. Anyway, it is always nice to have a legend to attract attention 🙂

Kolomenskoye is a former royal estate with a huge area, so you will need at least a day to see it.

Basically, Kolomenskoye is an enormous park with a wooden palace, numerous churches and other facilities like a water tower, kitchens, falcon house, the cabin of Peter I and many other buildings.

The wooden palace is absolutely stunning! It is not the original one, but an exact modern replica built according to the actual sketches. However, the majority of the objects inside the palace are authentic.

But the most outstanding part of Kolomenskoye is the actual park. Just walk around the place, go to Dyakovo Settlement for spectacular views of Moscow and the Moskva River, go down to the river and walk at the waterfront, see its apple gardens, walk along Golosov Ravine, sit at the famous boulders Maiden’s Stone and Goose Stone. When I was there last August, there were not many people in these places, they were mostly interested in the palace and churches, so you will have the whole place to yourself.

Usually I don’t expect much from parks, but this one was made by the people, for the people, of the people. Shadowy alleys with benches to rest, fountains with music, a roller-skating rink, a pond with boats, strange sculptures: Gorky park has everything! You can rent bicycles, skateboards, rollers, boats, and have some fun!

Izmailovsky Kremlin is a strong must, and – the best part – the entrance is free. You just have to see the colorful buildings, which replicate terems. The Kremlin is packed with museums, but you will have to pay to enter them. There are several places to eat, so you won’t starve there.

While the part with these truly amazing buildings attracts hundreds of people taking pictures and selfies, the biggest part of the Kremlin is a flea market with dozens of stalls with souvenirs, matreshkas, coins, boxes with traditional ornaments, furs, paintings, clocks, amber, shawls, clothes, books, icons, Soviet times items. Uh, that’s a long list. Anyway, just wander around and enjoy!

7. Cathedral of Christ the Savior Someone will definitely mention to you this imposing building if you ask about the places to see in Moscow. It is the biggest church in the city, and is situated relatively not far from the Kremlin: you will see its golden domes from afar. Just remember: it is really huge! Unfortunately, I didn’t go inside because I was late: you see, I thought I could get there on foot from the Kremlin. Yes, I did, but the distance is huge, and I was so exhausted, that I didn’t really want to see it anymore. But even a glance at its exterior is enough to understand why it must be visited. By the way, according to pictures, it is magnificent inside.

Art lovers, that’s the right place for you! The Tretyakov gallery has several buildings, one of them dedicated to the 20th century art of Russia and the Soviet Union, and the other one to the Russian art at much earlier period till the 19th century. I visited the latter one: it exhibits all the paintings that we, as children, saw in our books: Vasnetsov’s, Shiskin’s, Serov’s, Ayvazovsky’s masterpieces. The vaults of the museum house a huge collection of old icons, the majority from the 14th century. I saw one that is 700 years old, and is still well-preserved. There is a very famous observation deck in the Sparrow Hills or Vorobyovy Gory: it offers panoramic views over the city, but, personally, I liked the other deck at the Russian Academy of Sciences. From here, you will get to see the complex of modern buildings known as Moscow City and Luzhniki Stadium (just like from the Vorobyovy Gory’s deck). But the one at the Academy of Sciences, being closer to the center, offers panoramic views of the Moskva River, the Cathedral of Christ the Savior, and even a part of the Peter I statue. Besides, you can have a look at the nearby Andreevsky Monastery, while you are there.

Moscow-City is an absolutely otherworldly sight in Moscow!

It is a group of skyscrapers at the riverfront that have to combine residential apartments, business centers and entertainment facilities. Every skyscraper is built in its own fashion and has a name. Many of them are higher than 330 meters! The highest one is Vostok Federation Tower: it is 374 meters high! Actually, it had been the highest in Europe before Lakhta Center in St Petersburg was built.

I don’t think it is possible to get inside as there are guards everywhere, except the 360 panoramic deck in the above-mentioned Federation Tower: the view is stunning. We had an interesting tour in Russian and our guide was very knowledgeable. If you want it in English call them first.

These are the top 10 places to see in Moscow. I am pretty sure, that, if you were there, your list would look different. What other places should I have added here? Probably, I will find inspiration for my next trip.

I guess it is safe to say you are interested in Moscow. Why not to have a look at:

Why to travel to Moscow

What to do in Moscow, Russia, for free

How to spend a perfect day in Moscow

Where to eat in Moscow