Stavanger, the oil capital of Norway, is a small city in the Southern part of Norway. It is one of the most beautiful small cities I have ever seen: it has colourful buildings, some fantastic street art, and the area of old town is simply spectacular! Now, what to do in Stavanger then if you have one day only? Just look at the buildings? Is there anything else? Yes, there is, and I have a list for you.

Tourists do not spend much time in Stavanger, as like I said, it is a small city, and all attractions are compactly located in one area. Usually Stavanger is used as a base for hiking the nearby mountains, Preikestolen (or Pulpit Rock) in particular.

I know that some cruise ships stay in Stavanger for a day, so my itinerary will come handy. I think there are people who would attempt to hike Preikestolen instead. It is doable, if you have enough time. Check my post on Preikestolen hike and make your decision. Frankly, if you have just one day in Stavanger area, maybe, it is better to opt for the hike. I would choose the hike 😊 But, luckily, I had more time 😉

Unfortunately, the weather was not so good when I was in Stavanger. I rarely get lucky with weather 😊 So, let’s start by exploring the city center 😊

What to do in Stavanger

I guess this is the most important museum in Stavanger after the Petroleum Museum. This is the right place to see the history and development of the city, starting with religious objects and clothing and ending with recreated look of rooms.

The lower floor of the museum houses a collection of stuffed animals and some skeletons not from Norway only, but from overseas as well.

And there is a huge area with toys that kids will love!

But what I found really special is the so-called Cranium Choir: it is skulls of animals with faces of people projected on them and they sing! It is a powerful way to show that we have to protect animals and the environment.

Things to know: there is an organization called MUST and it includes a couple of museums in Stavanger. I could not find their names, but I know that you can buy a combined ticket for all of them for 95 NOK. I strongly advise you to ask about it in the city museum. It is much better to have a combined ticket instead of paying everywhere. Well, this is true in case you want to visit more museums.

Stavanger is at waterfront, but it does not mean it can’t have waters inland 😊 Breiavatnet is a small lake in the city center next to the main cathedral.

It is not very deep and is surrounded by colorful flowers, bushes and benches. I bet it is a nice place to sit when the day is sunny 😊 But it gets even better thanks to numerous swans and water fowl that are not afraid of humans. I don’t remember seeing so many swans in one place as in Stavanger and Sandnes.

Stavanger Cathedral is small, I would say, very small compared to the cathedrals I have seen in Spain or Czech Republic. It is not richly decorated but is rather rough gray stone with thick columns on both sides.

The construction of the cathedral started around 1100, which makes it the oldest one in Norway. It was reconstructed several times, and lost part of its medieval look.

The cathedral has characteristic features of Anglo-Norman and Gothic styles. Its most interesting parts are a magnificent stained-glass window and richly decorated pulpit. The window is a new addition: it was created by Victor Sparre in 1957.

Fargegaten can be translated from Norwegian as Colour Street. I guess it is not a mistake to call Fargegaten the most instagrammable place in Stavanger 😊 After all, this street is just rows of buildings of different colours: pink, orange, green, purple, etc. The idea to paint the houses is quite recent: in 2005 a local hairdresser came up with the concept.

It is always crowded, so selfie lovers will have to wait a bit before they can take pictures 😊

Actually, Fargegaten is in Øvre Holmegate street. This is in case you can’t find it by this name.

I guess this museum is the main one in Stavanger. It talks about the history and development of the oil industry in Norway, and many machines and equipment are exhibited here. I do not understand much in this industry, so I skipped many parts of the museum. But there is something that caught my attention, and namely the short movies where people talked about their personal experiences. These short movies were informational, but there were a couple of emotional ones. For example, I almost cried after watching a film about an underwater worker who died as a result of an accident. In short, just go and see it for yourself 😊

And don’t forget about the views! Just go to the upper level, go out and enjoy it!

And there is a very nice restaurant at the museum, and it is not a place for tourists only: locals go there more than often. When we were there, I ordered an open sandwich with shrimps, and it was huuge and delicious 😊 I strongly recommend going there.

More info on the admission and opening times is here.

Walk along the waterfront

The waterfront in Stavanger is a very picturesque place with colorful buildings, some fancy sculptures, the Maritime Museum and many ships. You won’t spend much time here as the waterfront is not long, but, still, it is a very important area.

And, in case you need help, the tourist information center is there as well.

This is by far the most beautiful and well-known part of Stavanger. Gamle Stavanger is several streets with white wooden buildings built in the 18th and 19th century and they make a picturesque sight. There are many flowers and bushes between and on the houses, so this place is perfect for pictures.

It is a conservation area and Stavanger has received several awards for preserving it. Some houses in Gamle Stavanger are public, but the majority are private.

Just have a walk around and enjoy the beautiful views. I, for example, spent a couple of hours in this small area just taking pictures, until it started raining cats and dogs 😊

If you are hungry by this time, I can recommend Skagen Restaurant on the waterfront. I can’t comment on prices, as Norway in general is very expensive, but the food is delicious! I ordered salmon – it is Norway, after all 😊 – and it came with red caviar 😊 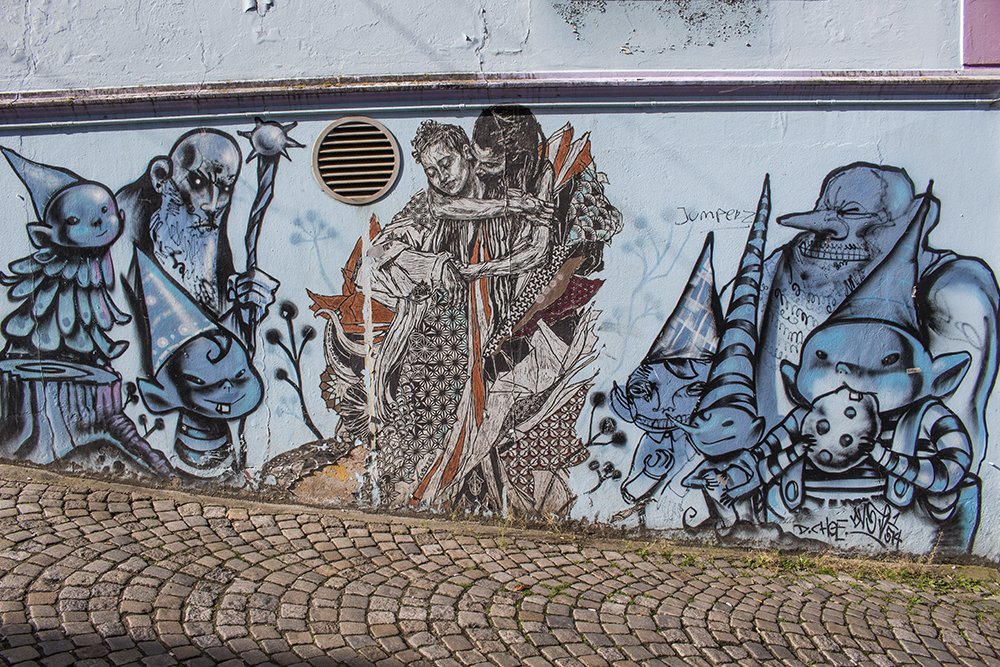 I noticed that Stavanger is quite rich in street art. There are no designated areas for that, you will see it around the city walking around.

What to do in Stavanger: places I missed

As I had one day only in Stavanger, there are some places I missed, but I would have loved to visit them. I am not sure that you can fit all of the places I mention in one day, so it is better to select what you would like to visit and make your own itinerary.

In the end, maybe, it is nice to have two days in Stavanger and take everything slowly 🙂

This museum is not huge either, but it was closed the day I was there. If you have time, pay it a visit: it exhibits objects from the rich history of Vikings.

It is called Norsk hermetikkmuseum in Norwegian, and, as the name suggests it, it is dedicated to the development of canning in Norway. The museum is in Gamle Stavanger among these fantastic white houses, so you won’t miss it. Just know that it is small as well.

Known as Stavanger kunstmuseum in Norwegian, it houses a collection of paintings, sculptures and tapestries. The main emphasis is on the Norwegian artists. And the building itself looks interesting. Just keep in mind that it is a bit far from the usual tourist path.

I have already mentioned it above, but I did not go there. It exhibits everything related to the Norwegian maritime industry, including ship models.

Yes, this is a special place. This mansion built in 1881 belonged to the Berentsen family. It is famous for keeping the authentic furniture of gothic, rococo, baroque styles and the atmosphere of the end of the 19th and the 20th century. Unfortunately, this mansion is open for visits in summer only for 5 hours a day. I think it is included in that MUST organization I mentioned above.

Well, now you know what to do in Stavanger if you have one day. Frankly, I think, one day is enough. The budget for the day is 215 Norwegian Crowns to spend on entrance fees to the museums. When it comes to food, it is much more expensive. Depending on the place you will go I would estimate around 200-300 NOK per person.

If you have more time, you must hike Preikestolen, and, if you are brave enough, Kjeragbolten as well 😊 But that’s for other 2 days 🙂 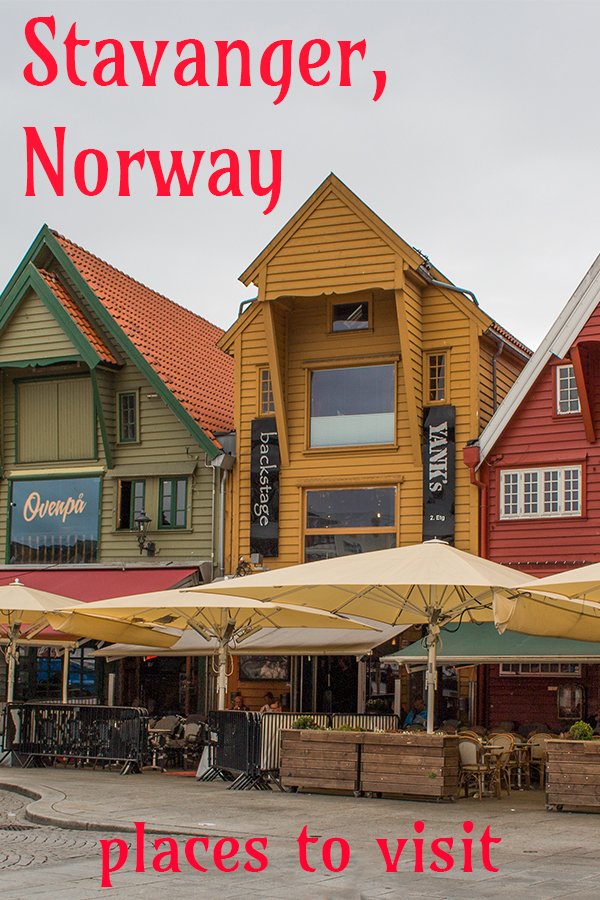