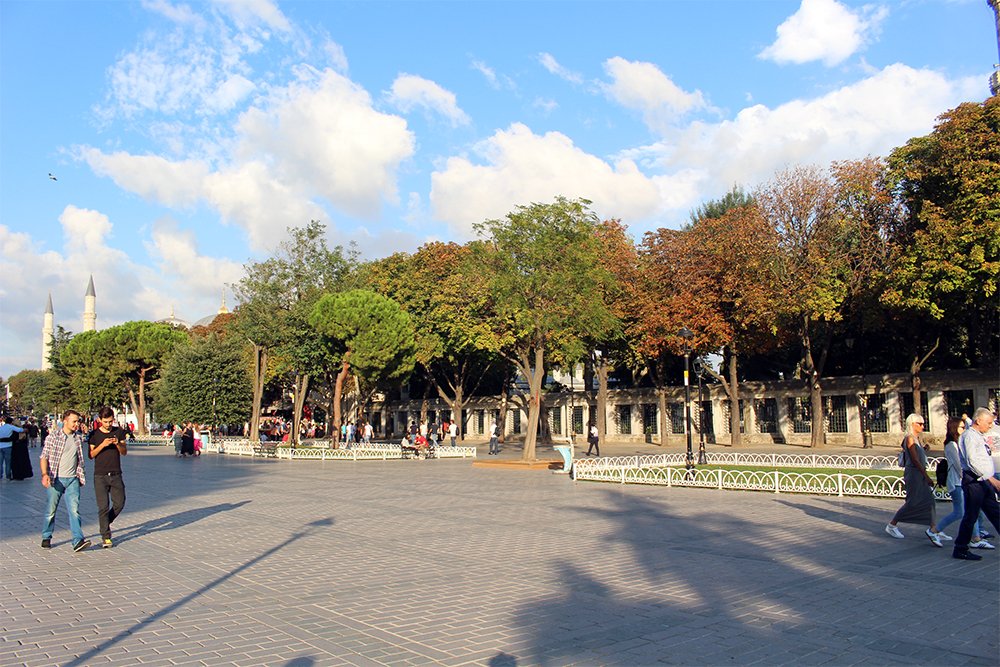 Even before my first trip to Istanbul (where I went absolutely unprepared, by the way), I knew there are dozens of places to visit. There are mosques, churches, palaces, fortresses, bridges, bazaars: enough to satisfy all tastes. Some tourists like museums, others prefer to admire architecture, but when they come to Istanbul, they all have the same starting base – Sultanahmet square.

Need help with planning a trip to Istanbul? I am here to help!

Centuries ago this place was the Hippodrome of Constantinople, the center of its social life, but today we know it as Sultanahmet square. I think it is safe to assume that the square is the place where the journey to the glorious past of Istanbul begins. It is a starting point for every tourist, mainly because of the Blue Mosque which happens to be situated there. But the mosque is not the only place which is worth attention in the square: there are some other significant monuments. But let’s start our journey to the past with the Blue Mosque.


This magnificent mosque is officially called Sultanahmet Camii, and it is ‘blue’ because of the handmade tiles that decorate its interior. The construction of the mosque was ordered by Sultan Ahmet I and it was erected on the very place where the palace of the Byzantine emperors stood.

The hallmark of Sultanahmet Camii is its six minarets: at that time only the mosque in Mecca had this number. The legend says that the architect heard ‘altı’ (six) minarets instead of ‘altın’ (golden) minarets. Thus, after the construction the sultan had to donate money to build the seventh one for the mosque in Mecca.

I was left speechless when I first entered the mosque. It is enormous! That’s definitely a place where you understand how small you are, so spend some time here admiring its grandeur, the amazing tilework and stained glass windows.

The mosque is open to visitors every day, and tourists are allowed in between pray times.

The Turkish and Islamic Art Museum

The building used to be the palace of Pargalı Ibrahim Pasha, the grand vizier of Suleiman the Magnificent. The name should sound familiar to you if you watched the famous Turkish television series ‘The Magnificent century’.

German Emperor Wilhelm II visited Istanbul in 1898, and this fountain commemorates the second anniversary of his visit: strange anniversary, if you ask me. It was built in Germany and transported to Istanbul in parts.

Probably, the most interesting thing about the fountain is that it was assembled on the place where a plane tree grew. Why is it so important? To calm down the rebellion of the Janissaries some Ottoman officials were killed and then suspended on that tree.

This column is about 2,500 years old, and was brought to Constantinople by Constantine I the Great from Delphi, Greece. It was erected to commemorate the Greek warriors who defeated the Persian in the battle of Plataea. The column came with golden tripod and cauldron that were lost in time.

Originally its height was about 8 meters, but it was destroyed in the 17th century, so now tourists can see only a part of the column in Sultanahmet square: one out of three serpent heads is exhibited in the Museum of Archaeology.

This obelisk also known as Dikilitaş comes from Egypt: in its glorious days it was part of the temple in Karnak. As the name suggests it, it was pharaoh Thutmose III who ordered the construction. This obelisk has a counterpart in Rome in Circus Maximus.

The erection date of Constantine or Walled Obelisk is unknown, but it was most likely covered with bronze plaques which were stolen by the Crusaders.

These are the main sights of Sultanahmet Square. And when you are done with the walking around, buy yourself a simit, sit down on a bench, have rest and contemplate!

I guess it is safe to say you are interested in Istanbul. Why not to have a look at:

Traditional Turkish food: what to eat in Istanbul

Things to do during a short layover in Istanbul

Where to stay in Istanbul: the best areas and hotel recommendations

More than 20 places to see in Istanbul

A guide to the Prince Islands

10 things to avoid doing in Istanbul