St. Petersburg has always been a magical, must-see place in our family. I heard stories about it from my grandma and father (who lived in the glorious times of the Soviet Union): they spoke of the city with great affection. My parents and I were born in the USSR, and Leningrad (St. Petersburg’s name during the Soviet time) was probably more important to us than Moscow. I guess one of the reasons might be the horrors the city went through during the World War II and survived and returned to its former glory. Or, probably, it was the fact that it kept its status of the cultural capital and is still full of places that take breath away when one sees them. After visiting St. Petersburg I made a list of those places which are a must-to-see in my opinion. But it is famous for its suburbs as well, so I compiled a list of the best day trips from St. Petersburg.

If my grandma used to tell us stories about how she sold honey or got lost in Leningrad because she took the wrong exit in a what we would now call a shopping mall, my father constantly told me to visit Peterhof if I ever went to St. Petersburg. Luckily, Peterhof is not the only place outside the city, so here are 3 towns I would advise everyone to visit, and, as the title suggests it, you will need a day for each one of them.

When I asked one of my friends to review my blog post on 7 places to visit in St. Petersburg for first timers she came back to me claiming that my list is incomplete. She said that she strongly associates St. Petersburg with drawing bridges and Peterhof. So here I am, putting Peterhof to the list 🙂

Peterhof is a small town not far from St. Petersburg. Its palace and parks are called ‘the Russian Versailles’, and some even say that Peter I ordered its construction to actually surpass the French palace complex. And if he did, he certainly succeeded: I visited both places and I can pass that judgement 🙂

The Grand Peterhof Palace suffered a lot during the siege of Leningrad: it was almost levelled to the ground by the German, and the restoration started immediately after the end of the World War II. You cannot even imagine the amount of work that was put to make the palace shine again!

The palace itself is simply magnificent, but Peterhof is more famous for its parks and fountains: the most famous are the Cascade fountains of the Lower Park with ‘Samson tearing the lion’s mouth’. Upper Garden is free to visit, while you will need to pay to enter the Lower Park.


The main palace is not the only one in the area: if you wander around you will see lots of other small palaces and museums, and some of them are really interesting like Grottoes of the Grand Cascade or the Imperial Yachts Museum.

How to get to Peterhof

This small town hosts another famous palace complex: Catherine’s Palace that is known for its magnificent gilded halls and rooms.


As the Peterhof Palace, this one was almost completely destroyed during the World War II. Of course, lots of the precious artefacts were saved and moved to a more secure place, but one – the famous Amber Room – was stolen by the German, and its whereabouts are still unknown. The room is covered in amber plates, but the one that is open to tourists today was re-created by Russian artists, and this work was partly funded by a German company.

The park around the palace is not as impressive as the Peterhof’s, but still very beautiful.


In addition to the Catherine’s palace, you can visit museums like Arsenal Museum or Court Carriage Exhibition.

How to get to Pushkin

Pavlovsk palace complex is in the homonymous town. It is quite far from St. Petersburg, so I am pretty sure that just a few tourists attempt to go there.

Unlike the other two palaces, this one is in the form of a semi-circle, which, honestly, makes it more impressive: imagine staying in front of it and being surrounded by its walls from both sides. And the light yellow color makes it stand out contrasting the blue sky.

While the palace is truly beautiful, this complex is famous for its park, which actually looks more like a forest. When you stroll around, don’t miss the so-called ‘most beautiful spot’: it is a dark alley with tall pine trees, truly magic. Anyway, the whole park is really impressive in early autumn, when the leaves turn golden and red. I was there in late November, luckily the trees weren’t bare, but I can only imagine how magic it is in October.


How to get to Pavlovsk

Any other ideas on day trips from St. Petersburg?

I guess it is safe to say you are interested in St Petersburg. Why not to have a look at:

Things to Do and Places to See in St Petersburg

7 Places to See on Your First Time in St. Petersburg 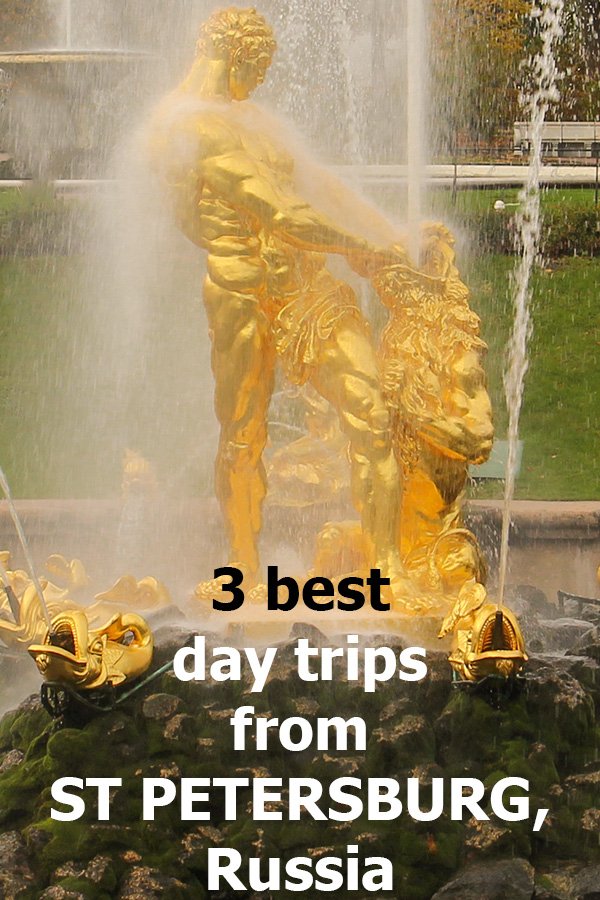 Don’t miss any posts, subscribe to the bimonthly newsletter!